The oldest settlements of Virovitica area were in the nearby hill Bilogora. There were the oldest paleolitic people who were hunters or food collectors and they were living in the area of hills, forests and Drava River. During the winter they went west to their caves and waited for winter to be over. Older Paleolithic inhabitants disappeared quite fast and were exchanged by younger Neolithic. That newer population was involved in agriculture and lived in small housing half in the ground. 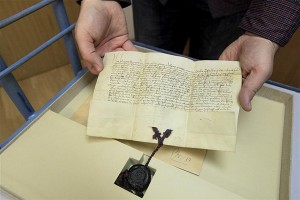 So in the first half of 13 century Virovitica was not only “magna villa-great place”, but it also had exquisite position and importance in the wider area of Slavonija. It is proved by the fact that the kings from Arpadovic family were very often in Virovitica during the 13 century and had their season castle. Also, Koloman II had his great properties here.

In November 26, 1242. King Bela IV issues famous Golden Bull in Virovitica by which the City of Zagreb gains the status of free royal city! Queen Marija, the wife of Bela IV was often in the City of Virovitica and in the year 1248 became the owner and protector of the City.

How did Virovitica get name?

Croatian natives was pronounced as Verevče. That expression Virovitica got from the brook that was going down the Bilogora hill and went by the settlement. Today that brook is called Ođenica.

On the great map of Slavonia by Lazius from 1556. the city was marked as Werewcze and the name Virovitica (Virouiticza) was mentioned for the first time in Vramceva chronics while later in most of history documents is mentioned as Werowiticza, Werouitiza or Verovitiza.

Virovitica in the middle age

There is not much information about how Virovitica in the middle age looked like. The whole city was probably surrounded by built soil and wood castles. After the burglary of Mongols earth pits were dug and the water from the brook Verevce was let into it. In the center of the city there was a church of st. Kuzma and Damjan, and inside there were two monasteries. Franciscans were brought to Virovitica by Queen Maria between 1250. and 1270. and Dominicans were later accepted by queen Elisabeth. County of Virovitica (comitatus de Wereuche) was mentioned in 1275. in the document of queen Elisabeth. The area of Virovitica County in the middle age was often changed and therefore it is hard to determine its development phases.

On July 30, 1552. Požega “sandžak beg” Ulama surrounded Virovitica with powerful army. The city was supposed to be defended by 50 Harames but since the army was so powerful, the City capitulates without the fight. In that way in 1552, Virovitica was governed by Ottomans. At the end of the 16 century, Ottomans started to settle their followers. Many medieval villages suddenly disappeared and were never renewed. Instead of them, new ones appeared that exist until today.

The rest of catholic inhabitants were left without religion heads because the relationship between Catholic Church and ottoman government was totally broken. For more than 120 years mostly ottomans were living in Virovitica. They reconstructed older city buildings for their own needs and the rest were disrupted.

So by the end of the 16 century Virovitica gained the look of ottoman “casaba”. The end of Ottoman governance in Virovitica begins on July 13, 1648 when the army of general Lesli surrounded Virovitica. In the negotiation process, Ottomans got the guarantee that they will in exchange of giving up the city have free entrance into Bosnia. At that time there were 300 janissary and 1000 Ottomans with wives and children. When they headed towards Bosnia, “krajiška” army killed them near Brestovac. Shortly after the liberation of Virovitica from Ottomans, Sopje, Voćin and Slatina also became free. Until the year 1687, whole west Slavonia was in the arms of krajiška military and from then, new age begins.

Development of Virovitica was very slow during the first half of 18. century. To intensify the process of economy development, king Karlo VI started to sell the land to foreigners. During the government of Marija Terezija, Virovitica manor comes into the possession of feud Marko Pejačević and later it was inherited by count Josip Pejačević. Pejačević dried the water Rogovac and grow fruit yards, fish in the lakes and wine yards. Antun Pejačević who was Josip son, lived in Virovitica and built new castle in 1804. that was finished by his son who was also called Antun.

Until then, all Pejačević family members lived in Virovitica all the time and after that they were leaving quite often living mostly in Vienna. 1841. the Castle was sold to the family Schaumburg-Lippe that reconstructed the castle and built first floor and it was the time when the castle got the look that it has today. Also, a park was grown around the castle.

Castle Pejačević and the park are today in the center of the city and fall into the category of the most beautiful representatives of the cultural history to which Virovitica citizens are very proud of. Park contains trees that are 150 to 180 years old and some of them are even more than 200 years old. It is protected as a nature monument and has 88 plant species.